Over the past few months I’ve been addicted to the combined simplicity and awesomeness of the Raspberry Pi. When my mom got me one of these for Christmas, I thought it would be something that sat around and collected dust. However, I constantly find myself doing productive, fun things with the Pi. To date here is a list of things I’ve accomplished with my small $40 computer

While I could write entire books about any of these experiences, I’ll be talking about the last one. I’m constantly on the go with my Raspberry Pi (I take it to work every day) and one of the most challenging parts of working on the machine is getting an SSH connection to it. I don’t control the network at work and usually have to hardwire my laptop to the Pi with an ethernet cable, have a specific IP configuration for both devices, blah blah blah… It’s a pain.

Yesterday, I spent about 2 hours searching the internet for a small portable TV. I wanted something high def and with an HDMI input. As it turns out, there is either a huge hole in the market, or I’m the only person looking for this kind of device. As I was looking for something with a 7” screen, it occurred to me that I have a very capable Nexus 7 tablet.

I started brainstorming and thinking about how I might be able to pull this off. I already knew I could connect over SSH or VNC through my local network. The problem with this approach is that I might not have a network while I’m on the go. I went to CodeMash in January, and wanted to hack on my Pi so badly, but I didn’t have a device with HDMI, or a USB keyboard with me. If only I knew I could have used my little tablet and Logitech bluetooth keyboard. Here’s what I should have done before heading off to CodeMash. 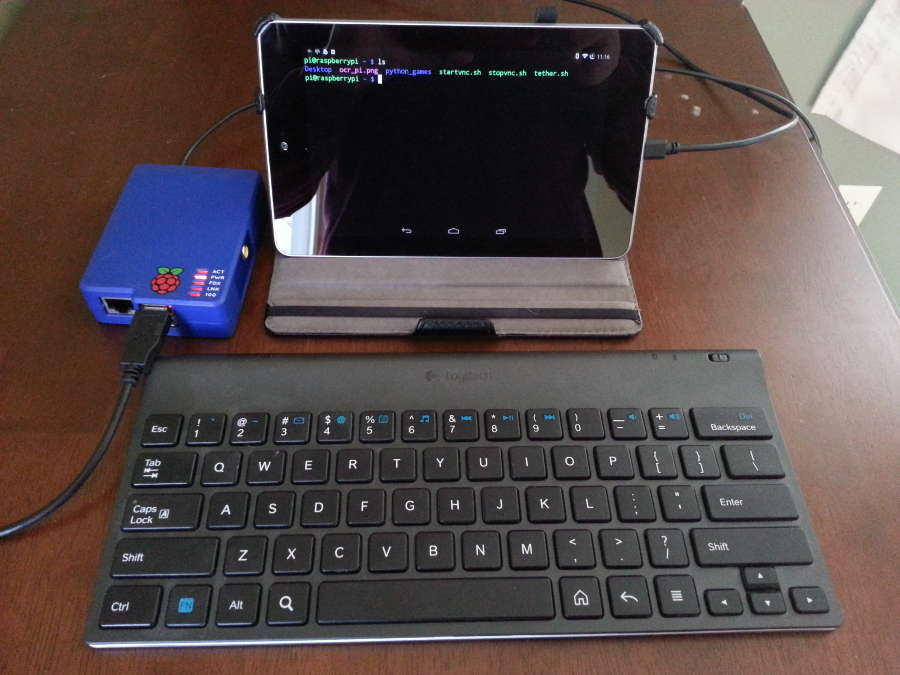 This is my favorite part of this approach. Sometimes working on the Pi is a pain because you have cables and devices all over the place. When I initially set up a Raspberry Pi, I need keyboard, ethernet cable, hdmi cable, power cable, mouse, 46” TV with HDMI input and my girlfriend can’t watch TV. Here’s what my setup looks like now:

Another neat thing about this approach is that while you’re tethering via USB, my tablet is also pulling some charge through the connection. The amount of power left over to charge the device is minimal, but The tablet’s battery will last quite a bit longer this way.

First, you’re going to want to set up a static IP address for your usb connection.

Append the following lines to the end of the file

Note your gateway might not be the same as mine. To see what your gateway address should be, do arp -a after you tether your tablet (directions for that are in the next section).

Next, install your VNC Server (or move on if you don’t care about the GUI)

If you ever want to kill the VNC server

NOTE: VNC Server will need to be restarted if you power down the Pi. There are ways to start the server at startup, but I won’t cover that here.

Once I had Cyanogenmod installed, the following option showed up in my settings. 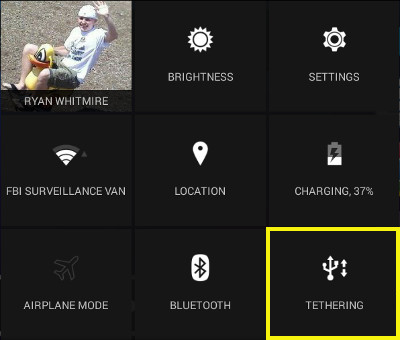 Enabling tethering will give your Pi an IP address and your tablet will now have SSH and VNC access. Now you just need some apps. For SSH, I use VX ConnectBot. Using this app with a bluetooth keyboard is pretty close to the same experience you would have if you were hacking right on the Pi.

For my VNC connection, I use VNC Viewer.

If you like computers, and you don’t have a Raspberry Pi, GO BUY ONE. It’s hard to have buyer’s remorse over a $40 computer that fits in the palm of your hand.